“Zionism is nothing different than being proud to be Hungarian” 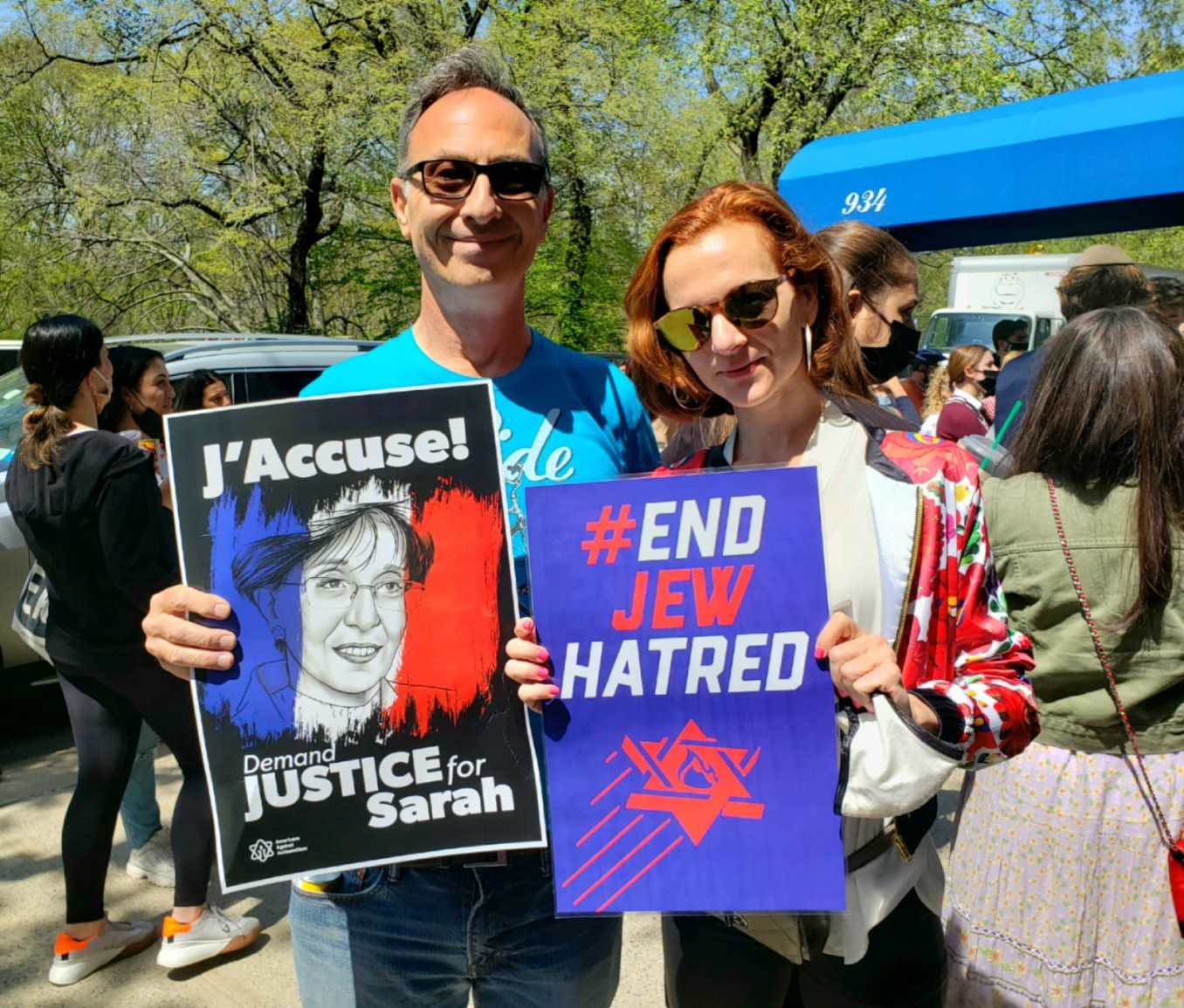 She argues for Israel as a proud Hungarian, made a name for herself in the Jewish community in New York, and survived several terrorist attacks. Who is Gulyás Virág, how did she become a supporter of Israel, and what was the path from classical ballet to Zionist activism? This interview was originally published on Neokohn.hu on 20th May 2021.

Our readers may already be familiar with your strong Zionist journalism, and you have many followers on your Facebook page called Almost Jewish. Yet perhaps fewer people know who is Gulyás Virág; where does she come from, how did she become a great pro-Israel activist?

My path was not straight at all. I always used to say that I came from a pretty antisemitic background. I think there are at least two kinds of antisemites: there are those who are consciously antisemitic, and there are those who do not know better, do not know the details, who grow up on Jewish jokes. I come from this latter circle. I thought a lot about why I only knew Jewish stereotypes, and to this day, I can’t tell you where it came from. I didn’t really hear it in the family, they didn’t say that at school, but I still grew up that way. This is hard to imagine for today’s generation because social media is there today, and you decide what you are surrounded with. When I grew up, there was no social media, and what crept in built up your individuality and world of thought. I knew nothing else about the Jews; I only saw occasionally that Orthodox Jews were walking in Kazinczy Street, next to my ballet institute.

As the years passed, Israel always seemed distant. When I first went out to Israel in 2011, I didn’t even want to go out – it’s no secret that I went for a boy. But even then, I couldn’t tell why I had aversions, though, at the time, I wasn’t even interested in the reason. The first time I spent 2-3 weeks there, and that’s when something started in me. I asked the question: why do I have stereotypes? Israel was a great place as a tourist, I went back many times later, and it got deeper and deeper. At first, it was only emotional; later, it was also spiritual interest. Why do I think negatively about Jews? I asked myself the tough questions. I wrote an article in 2012, and it immediately became viral, I woke up with 200 messages written by rabbis, secular people, professors. I was shocked that my own search for a path might interest someone else! I’ve been to Israel later, I’ve been back 20 times since then, and being there as a European, seeing the guns was shocking; it’s an entirely different world. 2014 was a big turning point, as I was just outside when the three Jewish boys were kidnapped and the almost war-like situation broke out.

When I first had to rush because the siren sounded, I understood what it meant to grow up in peace. That’s how I started asking questions.

You live in the US now, but you used to live in Brussels, and before that in Switzerland. How did you get to so many countries?

I graduated from the Hungarian Dance Academy. I could have gotten a contract at the Opera House at home, but I went out to Switzerland. I’ve always been a rebellious figure; I was the first girl to choose abroad. I was in Switzerland for 2.5 years, then I was admitted to the Royal Danish Ballet, but I knew I wanted to stop dancing. There was a kind of duality in me; I wanted to do something with my brain as well. There is a stereotype about dancers that we are stupid and it is always confusing because I come from an educated family, I read a lot, and yet they looked down on me. So I first obtained a BA in international relations, became a diplomat, and worked at the Permanent Representation to the EU in Brussels when Hungary had the presidency in 2010-11. After that, I stayed out in Brussels, lived there for 6 years, I was a communications manager at various EU agencies. I was also right at the airport in 2016 when they blew it up. The next day I went to work, and my colleagues – all Western Europeans – talked about how we were responsible for being attacked. And I, who had just survived the attack, asked, what are you talking about? The answer was, “well, we didn’t integrate them”. Yet we were talking about third-generation Belgians who lived there, spoke the language. I didn’t speak French, but somehow I didn’t become a terrorist.

So Western Europe was such a deep cultural and moral shock that I preferred to come to America.

In 2016, I moved to New York, where I earned my second MA degree, here in Jewish and Middle Eastern history at Touro College.

Isn’t it contradictory that you didn’t prosper in Hungary as a patriotic person?

I did not find my place in Europe. I’m a very patriotic person, but at home, I found that in interviews, I was faced with questions like, “So if you quit your ballet, will you quit this job too?” They didn’t understand that if one changed careers, that wasn’t a stumbling block. You may have been very good at it, yet you stopped! The reaction to my story in America, however, was, “My God, how great it is that you have done so many things, how much more you can accomplish!” Here, my versatile background was a good thing. I came out without family or friends, and today I can say boldly and proudly that I have made a name for myself in the Jewish community. In a few years, I built something I didn’t think was possible. And my Hungarian role also plays a big part in this.

Why is it special to be Hungarian in your role?

The truth is, I was utterly immersed in defending Israel. In 2017, my first article was published in Hungarian – in fact, you translated it! After that, I started looking for what I thought about Hungary, Hungarian Jews, or the Hungarian-Israeli relations. Being Hungarian abroad is not easy today, especially the role I took on: Zionist, conservative, white, female, and Hungarian. These are large surfaces for attack from all sides. To be sure, today, I start all my foreign interviews with “I’m Hungarian,” and, wherever I can, I’m trying to counter the many “fake news” about Hungary.

Have you ever been attacked because of your Hungarian origin?

They have attacked me many times because I’m Hungarian, both Jewish and non-Jewish people.

To be a proud Hungarian abroad, you need thick skin.

The attack begins with “if you are Hungarian, we do not like you, because Orbán is also Hungarian. We hate him, so we hate you”. In fact, the same logic is applied by the BDS movement to Jewish students at universities: because you are Jewish, you are responsible for Israel’s actions. They attacked me with the same logic! And, of course, there have been accusations that Hungarians are still responsible for the Holocaust, that anti-Semitism is in our blood… When a Holocaust survivor told me this, I was faced with a strong moral question: can I correct this person? We, young people, are not responsible for something which happened before we were alive. But I realised that he had been through too much, his family was taken away by Hungarians, so I didn’t argue with him.

How aware are students of European history in the US? Do you have to explain to them what Nazism and Communism were like?

They know nothing about the latter; you have to explain to them that Communism is not a good thing. When I gave a lecture at Columbia University, for example, many students said that their goal was to have socialism in America. Communism, they said, was free bread and equality. But they don’t even think about the details. This is most characteristic of prestigious, wealthy universities, where the elite is being educated. Where I studied was a slightly different place. The university was Jewish-founded, and everyone was Jewish, I was almost the only non-Jewish person. There they saw things differently. Or take, for example, the people who left after the failed 1956 revolution in Hungary, whose parents went out then. But those who are not Eastern Europeans or Jews or have not heard of Communism live in a completely different world. Everyone is busy with white privilege, but what they don’t know is that being born in America is the greatest privilege. Who is in a more privileged position: an African person or a black person in the US? Americans don’t even realise what it was like that you couldn’t write a newspaper without censorship in the kind of system our parents were born into.

The world has accelerated, everyone has an opinion, and social media is really big. Everyone is terribly superficial.

There were hundreds of people on the streets of Toronto yesterday, waving a Palestinian flag to save the Palestinians – while thousands of missiles were fired at Israel!

What reception do you receive when you come home with the experiences mentioned above? How is a Hungarian patriot who is also a Zionist considered at home?

Some people understand what I’m saying. There is certainly still a shallow disinterest in Jews. When I say Zionism, I get both good and bad reactions. Zionism has a negative ring to it. Yet – to put it simply – it is nothing different than being proud to be Hungarian than what our revolutions of 1848 or 1956 were about: it is about liberty! Zionism is about the same thing, only a different word is used for it. The idea is to have a country of your own.

I also see the 2015 migration crisis as an important turning point in how Hungarian-Israeli relations changed.

It should be noted that the issue of migration is not explicitly a “Jewish issue.”

What Israel has endured for decades, and still endures today, is now beginning to appear in Europe. Just look at the terrorist attacks. And if someone starts searching where the attackers came from, they will be accused of Islamophobia. Yet, it is not Islamophobia to state that the perpetrators of almost all the attacks were Islamists. Whoever says this is then attacked by cancel culture. It’s hard to be a journalist or activist today because cancel culture is thriving. A few months ago, I wrote an article about how cancel culture is essentially against the nature of humanity, which is about changing. I’m sure I said something at the age of 15 that I wouldn’t think of as a good idea today, and I’m sure I’m saying something today that I’ll see differently at the age of 50. What cancel culture ignores is human development.

How do you spend your time now?

Among others, I am a leading member of the End Jew Hatred movement. In essence, we are trying to copy the BLM movement in the sense that they didn’t come out of nowhere either. This movement grew underground for 5-6 years, spending time developing strategy and slogans. Unfortunately, there is no consequence, outrage on the Jewish side, if a Jew is killed. There is some protest, but that’s it. Let’s just look at the Sarah Halimi case in France. Yet Palestinians can mobilise, gathering masses for economic and academic boycotts. Obviously, it also includes the fact that young people are happy to demonstrate, and these views are especially popular among them. An entire generation grows up on such superficial views.