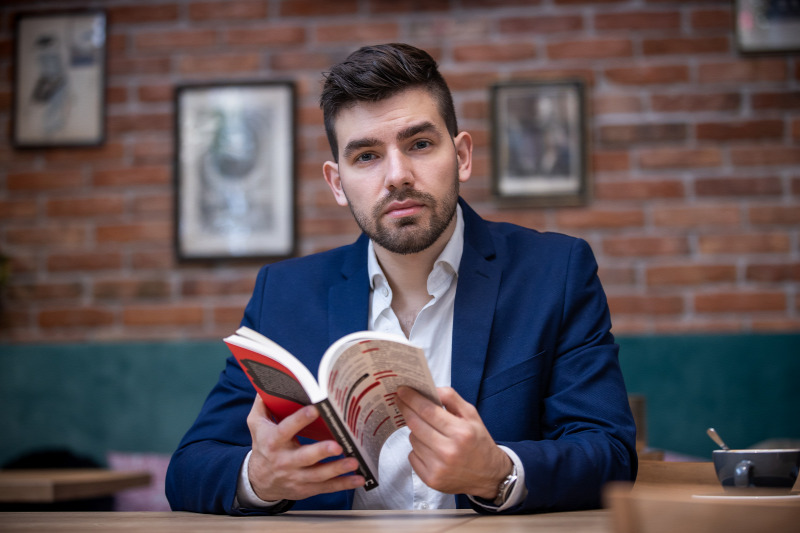 After opposition activists posted my home address and email address online, I had to endure a flood of anti-Semitic harassment – writes our very own László Bernát Veszprémy on the website Mandiner.

On December 23, 2021, I published an article in the blog section of the English-language Israeli news portal Times of Israel. The title of the article was “Should a homophobic and anti-Semitic politician defeat Hungarian Prime Minister Viktor Orbán?” and I listed in the article how many anti-Semitic politicians PM candidate Péter Márki-Zay has been photographed or worked with. The list is long: one of them, Tamás Sneider was a former skinhead and the former president of the far-right party Jobbik. Márki-Zay’s campaign was supported by right-wing extremists Barna Csibi. But Márki-Zay also stood by László Bíró, a Jobbik politician, and Lajos Rig, another Jobbik politician (Márki-Zay’s movement, the Everyone’s Hungary Movement, stood by Rig). As it is known, Bíró called Jews “lice-slides”, and Rig called Roma people the biological weapon of Jews.

In addition, after the Pegasus-scandal, Márki-Zay posted a photo of Hungarian PM and president of the Fidesz party Viktor Orbán standing in front of a menorah. (Back then, even Chief Rabbi Róbert Frölich and Jewish philosopher György Gábor spoke up against this).

In my article, I also pointed out that I think Márki-Zay, who called Fidesz politicians gay (“half the government is gay”, is also homophobic.

In the writing, therefore, I have given precise quotations about the public activities of a person who wants to be the Prime Minister of Hungary – that is, someone who has to endure criticism. As a Holocaust researcher and former deputy editor-in-chief of the Neokohn Jewish News Portal, perhaps I still have the right to this.

But my article visibly annoyed some, because I was reported to the editorial office of the Times of Israel, after which my article was deleted (the full text can still be read here). Unfortunately, I still don’t know the exact reason why my article was taken down – according to Miriam Herschlag’s letter, “Your writing appears to be aimed at (…) attacking its (the Hungarian government’s) opponents”. My letter of inquiry, which is also sent to editor-in-chief David Horowitz, received no reply. My article has, of course, gone through an acceptance process beforehand.

The fact of the removal of my article was then written about in the Hungarian media, such as HVG, but even the Hungarian Alliance of Journalists (MUOSZ) posted an article on its website entitled “The Trojan Horse of FIDESZ Media Failed”. It is “reassuring” to know that according to the largest Hungarian journalistic advocacy organization, censors should be cheered on and journalists should be attacked.

After that, however, I received threatening, antisemitic Facebook comments from opposition (far left and far right) readers in the Hungarian social media. “Let’s kick him from every direction,” a reader wrote. “If you really want to beat him, here’s his address (…) let’s break his face!” – wrote another who, who knows how, wrote my exact home address and e-mail address under the post. After that, I also received emails. I’m quoting the two roughest ones: “What do you think of yourself, you stinking little Fidesz Jewish worm, do you think you can get away with attacking the opposition? you are done in April! ” “YOU ARE DEAD!!! YOU DIRTY JEW WHAT ARE YOU WRITING ABOUT MARKI ZAJ, WE WILL CUT YOUR THROAT !!!! WE KNOW WHERE YOU LIVE !!! ” Of course, I have a photo of each comment and message, I will take the necessary legal actions.

Another aspect of the case is that the neolog chief rabbi Péter Kardos called György Bolgár’s show on Klub Radio, where he similarly complained that Márki-Zay had been saying antisemitic things before. I literally quote, “Márky-Zay says that a Jewish faggot who lived with a man was an adviser to (Viktor) Orbán.” The Jewish magazine Új Élet, of which Kardos is the editor-in-chief, shared this on Facebook with the following text: “Historian László Bernát Veszprémy made a similar accusation in his English-language essay published on the Times of Israel website. ”

All in all, I find the attacks on me shocking and intimidating, all because of an article that merely provided facts. By January 2022, the pro-opposition half of Hungarian public life had reached the point where a Holocaust researcher and journalist is threatened with physical violence, for daring to mention that the opposition-backed prime minister candidate was posing on the side of skinheads. And MUOSZ, the Hungarian journalistic association shows no solidarity with me, but is instead against me.

Why must a journalist be afraid in Hungary today? What was the path that lead to the point that antisemites could harass a family by posting their home address? Why do I have to put up with the threat of antisemites cutting my throat? These are the things that journalists and public figures who have assisted in the campaign against me in recent days need to think deeply about.